The Emergence Of TD As A Data-Driven Force In Banking 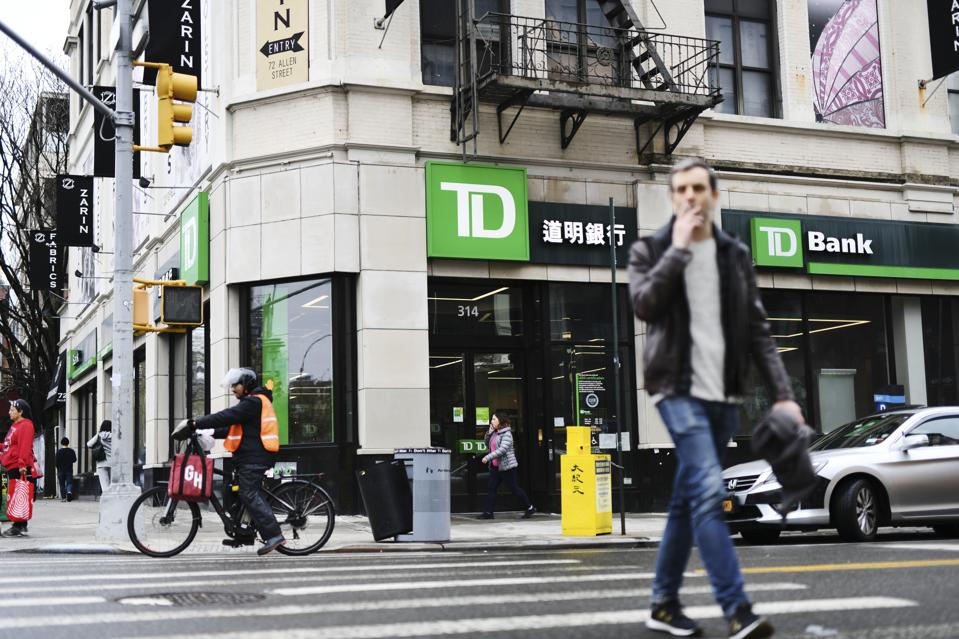 As the North American banking landscape continues to evolve, many consumers have noted the growing presence of Toronto-based TD Bank Group in major U.S. cities across the East Coast. TD Bank, which brands itself as “America’s Most Convenient Bank”, is now the 8th largest U.S. bank by deposits and the 10th largest bank in the United States by total assets.

I recently spoke with TD executive, Michael Rhodes, who serves as Group Head, Innovation, Technology, and Shared Services for the bank, and I began our conversation with a direct question — given that only 37.8% of leading firms report being data-driven, and only 26.8% claim to have established a data culture, would he characterize TD as being “data-driven”.  His response was quick and emphatic. “Yes, we are data-driven”, Rhodes replied, “We have made substantial investments in data and AI capabilities that are providing customer value today”.

Rhodes knows of what he speaks. As an industry veteran, Rhodes served as Vice Chairman and Chief Marketing Officer at MBNA, prior to its acquisition by Bank of America in 2005. MBNA had been a pioneer in the introduction of customer loyalty-based affinity cards, and like its mid-Atlantic neighbor, Capital One, was at the forefront of applying data and advanced analytics capabilities within banking. Rhodes has brought this same data-driven mindset to the roles that he has played at TD, serving first as EVP, North American Credit Card and Merchant Services and then as EVP and Head of Consumer Banking.

TD Bank Group is a Canadian multinational banking and financial services corporation headquartered in Toronto. It is a top-10 bank in North America and the second largest bank in Canada by total assets and by market capitalization. In 2019, TD was designated a global systemically important bank by the Financial Stability Board.   The bank and its subsidiaries have over 85,000 employees and serves more than 26 million customers. The U.S. subsidiary was created through the 2008 merger of TD and Commerce Bank, and today serves more than 9 million customers with a network of more than 1,200 “stores” in the eastern United States

Rhodes refers to TD as a “165-year old growth company”, noting that the bank has a long tradition of being deeply ingrained in the communities it serves. More recently the firm has shown itself to be an innovator in building online and mobile channels. Rhodes leads the firm’s innovation and technology functions, which include enterprise digital and data capabilities. His direct reports include a Chief Digital Officer and Chief AI Officer, as well as responsibility for the Chief Data Office. Rhodes describes his mandate as ensuring a “digitally-centric personalized customer experience”.  He remarks, “we serve our customers when and where they need us”.

Connecting With Students To Connect Them To Their Education

Whereas some of TD’s large bank competitors have been characterized as slow to adopt a data-driven mindset, Rhodes describes TD as having been on “an accelerated learning curve”, acting quickly to make critical investments in talent and technology. He reflects on growing up in Washington, DC and his family’s experience with National Bank of Washington (DC), where “the branch manager was the CRM engine”.  Today, TD manages massive volumes of customer data that are organized in a single place where analytics are applied, and insights distributed, to customer-facing bankers.

To accelerate their digital transformation, TD acquired in January 2018 a leading-edge AI firm, Layer 6 in a move which was characterized by The Wall Street Journal as “aimed at bolstering the Canadian bank’s artificial intelligence expertise amidst a broad push by financial services firms in adopting the technology”. Originally founded in 2011, Layer 6 now forms the AI division of TD Bank Group with Layer 6 co-founder Tomi Poutanen serving as TD’s Chief AI Officer. By adding Layer 6, TD has sought to positon itself as a leader in AI applications on a global scale.  Through Layer 6, TD is focused on developing high-value AI business use cases, while Rhodes works to “insulate Layer 6 from the complexity of the bank”.

A 2019 Wall Street Journal article, Chief Artificial Intelligence Officers Enter the C-Suite, discusses how TD has emerged as an early innovator in introducing the role of the Chief Artificial Intelligence Officer (CAIO). The mandate of the role is to work across organizations to spot new areas where AI can be applied to improve business and establish strategies. TD’s Poutanen notes that “organizations with a CAIO are in a better position to attract staff than those without a C-level AI executive. AI experts are drawn to places with a dedicated, centralized artificial intelligence resource, where they can work with peers and share in a common mission”. Rhodes refers to this as “controlling our data and analytic destiny”, noting Layer 6 performance in the recent RecSys challenge of recommendation engines and Google landmark challenge in which Layer 6 finished 2nd in the world. He observes “we are calibrating our AI talent against the very best in the world”.

Looking forward, Rhodes has additional objectives on the horizon. He plans to fill the Chief Data Officer role within his organization in 2020. To ensure success, he is looking for an individual who combines technical expertise, analytical credibility, business acumen, and a mission orientation to promote a data vision and agenda across TD. Data ethics and data privacy will be key components of the CDO mandate.

Rhodes observes, “We are in a trust business. We need to understand and meet our customer expectations. We need to educate our customers, and always protect customer information”. Rhodes sees TD as being well-positioned to play a leadership role in leveraging data, analytics, and the latest AI capabilities to serve its customers and to set an example of how one prominent bank can provide data-driven leadership. He concludes “Financial services are an exciting place to be if you are an AI professional these days”.