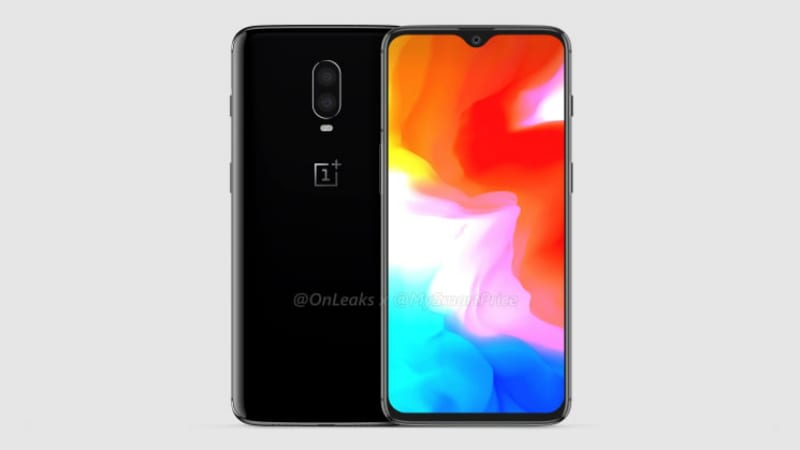 OnePlus 6T is rumoured to launch on October 17 based on a leaked India launch invite and a screenshot shared by OnePlus itself. The phone has also been confirmed to sport an in-display fingerprint sensor. So, with just about a few weeks to go before an official OnePlus 6T unveiling, we are witnessing excessive activity around the upcoming OnePlus flagship. The latest set of leaks brings to us a look at the 360-degree renders of the OnePlus 6T. The renders reveal a lot of design elements of the smartphone, so let’s get into the details.

The renders come to us via reputed tipster OnLeaks, who has been accurate about certain smartphone renders in the past, in collaboration with Indian blog MySmartPrice. On the front, we can see a waterdrop-style notch with the selfie camera right in the middle. The new notch style will translate into a higher screen-to-body ratio for the OnePlus 6T.

Previous leaks have suggested that the OnePlus 6T might sport a slightly larger 6.4-inch Optic AMOLED display panel with the same full-HD+ resolution. Back of the smartphone in these renders shows a dual camera setup, however leaks have been oscillating between this and three cameras at the back.

The MySmartPrice report also claims that the dimensions of the OnePlus 6T are 157.5×75.7×8.2mm and the phone will be 8.6mm at its thickest point, on the camera bump. In comparison, the OnePlus 6 has a thickness of 7.8mm, hinting at improved internals on the OnePlus 6T such as a larger battery. At its core, the OnePlus 6T is expected to get the same Qualcomm Snapdragon 845 SoC, coupled with 6GB/ 8GB of RAM and up to 256GB inbuilt storage.

Additionally, the leaked 360-degree OnePlus 6T renders show a USB Type-C port and loudspeaker at the bottom and a microphone up top. Right of the handset is shown to bear the alert slider and lock/ power button, while there are the volume control buttons on the left. As before, the leak is meant to be taken with a pinch of salt considering there is no official confirmation for these renders.